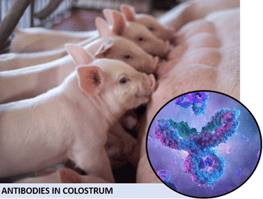 Scour —or diarrhea— is the main condition pig farmers observe at the pre-weaning and weaning stages. Scour in piglets causes significant economic damages. Losses accrue from dead animals, but also the poor performance caused by mild scours. Ill-thrift, increased costs, and susceptibility to other diseases are just some of the consequences of letting this scourge of piglets go unchecked.

What causes diarrhea in piglets?

Scour happens for a variety of reasons: nutritional, physiological, environmental, and infectious.

Piglets are born into a hostile environment, teeming with pathogens. They do not have their own immunity yet, so, instead, they get it from colostrum, which is rich in antibodies that will keep them safe against —most— pathogens, until they can produce their own.

As the piglets pass through the birth canal, dams also give them hundreds of species of microbes that colonise their intestinal tract. The gut microbiome helps piglets digest milk and, later, food. Furthermore, these beneficial microorganisms control pathogenic (disease-causing) bacteria and parasites.

When piglets do not get enough colostrum, bacteria get out of hand; even beneficial species can cause harm in the absence of immunity. When the sow has no immunity for a given disease, there is no protection she can pass on. Therefore, scours are more common in gilt-born piglets, and one of the reasons vaccination programs are often aimed towards low-parity breeders.

If the gut microbiome is disrupted, scour often follows. This can happen in several ways: excessive antibiotic usage, gorging, diet changes, or too-early introduction of food. This is often the cause of scours seen during weaning and the so-called milk scours. The environment also plays a role. Stress from overpopulation, air drafts, poor drainage, and cold installations favour disease.

Finally, pathogenic microorganisms try to infect pigs. Some have developed sophisticated mechanisms to get through the body’s defences (such as E. coli and C. perfringens ).

Coccidia is primary pathogen of piglets which don't need other support, please change it.

Table 1. Summary of the causes of scour in piglets[NM1]

The infectious causes of scour are manyfold. Let us have a look at the most representative ones.

Coccidia are parasites that reproduce in the gut lining of the small intestine and destroy the villi, which are in charge of absorbing nutrients, causing a severe decrease in performance. Coccidia by themselves do not normally kill pigs. However, as they damage the gut, they create the perfect conditions for other pathogens, such as Clostridium perfringens type A, to thrive.

Coccidiosis in piglets produces a creamy scour that can become watery as other pathogens contribute to the disease. Coccidia are extremely difficult to eradicate from the environment and infected pigs shed a massive number of oocysts—highly resistant eggs that infect pigs when they ingest them.

More information on Coccidiosis in piglets.

When it first affects a herd, TGE can be devastating. The disease develops quickly, in under a day. Piglets suffer watery diarrhoea and dehydrate quickly.

PED is similar to TGE, but it has a longer incubation period (3-5 days) and does not spread as fast. Therefore, it is easier to control.

Rotavirus infection causes a watery scour that usually lasts for a few days. It can also lead to dehydration and co-infections are common.

There is no treatment for these viruses. Veterinarians treat dehydration and secondary bacterial infections as they appear.

E. coli are harmless most of the time. However, there are toxigenic strains that induce the gut to secrete a lot of fluids, causing dehydration and scour.

Fortunately, and unlike viral infections, colibacillosis can be treated with antibiotics. Culture and sensitivity testing are necessary to select the right antimicrobial. Treating dehydration is also paramount.

Clostridia are normal inhabitants of the gut and, if the microbiome is healthy, they usually do not cause much trouble. However, when there is a disturbance, clostridia can get out of control and cause some of the most severe scours of piglets, which is typical mainly for C. perfringens type A. Clostridium perfringens type C is the deadliest and it causes haemorrhagic diarrhoea. Other types are also dangerous but cause a more typical, pasty scour. 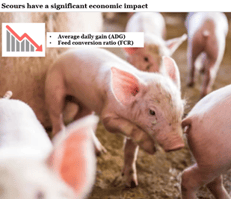 How much a farm loses to scour depends on the cause behind the problem. Because these diseases do not act in isolation, clinical signs are usually just the tip of the iceberg.

This pathogen can cause severe damage to the gut lining, average daily gain (ADG) underperforms well until the finishing stage. Feed conversion ratio (FCR) is also negatively affected, which will, of course, increase costs. In short, piglets with coccidia cost more to fatten and it takes longer.

Treating clostridial infections with antimicrobials is controversial and symptoms often worsen. Sulphonamides and other antibiotics have been used to treat coccidia in piglets[NM1] , with mixed results.

When it comes to prevention, the picture is a much brighter one, starting with hygiene. This is particularly true in the more modern production systems. With intensification, hygiene standards and protocols must be top-notch, otherwise they just will not prevent disease.

Since many of the causative agents of scour are passed on in the faeces, it is crucial to remove them and to keep slurries clean.Adding clean, extra bedding is also a good idea in the nursery. Rodents, birds, insects and fomites can carry faeces and spread pathogens between groups, therefore, pest control and internal biosecurity help in the fight against scour.

All-in-all-out management is highly effective, especially when paired with disinfection. However, consider that not all disinfectants work for all pathogens. For example, coccidia oocysts are resistant to practically all!

If a disease has become a problem on a farm, then you should consider vaccination.

Some of the most effective preventive measures are prophylaxis and metaphylaxis. The former means to give medicine even before there are signs of the disease; the latter implies treating apparently healthy piglets the moment others scour.

The use of prophylactic antibiotics is  forbidden in Europe. There is another type of drugs called coccidiostats, such as toltrazuril. These have proven themselves to be valuable aids in every animal farming industry.

For example, metaphylactic treatment of coccidiosis in positive farms reduces diarrhoea by 83-98%, reduces mortality by secondary infections by up to 63% (Ozsvary, 2018). This is usually more cost-effective than waiting for pigs to develop scour and treat the infections with antibiotics as they appear. Treated piglets had a daily weight gain 25 g higher than untreated ones, even in the absence of scour (Maes, 2007).

Get updates from our Blog

Coccidiosis is a protozoal disease that affects the small intestine and causes scour in suckling ...

Piglet diarrhoea and anaemia: diagnosis in the farrowing unit

Neonatal diarrhoea in piglets is one of the main issues that pig farmers and veterinarians face in ...

Treatment of Iron Deficiency in Pigs

Pigs develop anaemia when, for some reason or other, their blood is incapable of carrying enough ...

Bringing Piglets to a Higher Level

What if you could...

Join us on social media